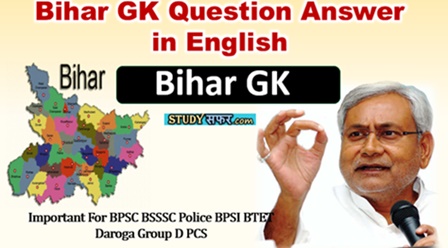 Hello friends, in this article today, we will know about some important questions (Bihar GK Question Answer in English) related to Bihar GK, which is very important from the point of view of competitive exams to be held in the state of Bihar.

Q.1 Which Jain literature has mentioned the 16 Mahajanpadas for the first time?

Q.2 The Nangi strike was done by prisoners of which jail?

Q.3 Which theatrical is composed by Bhikhari Thakur?

Q.4  Which district of Bihar is the largest tea producer?

Q.4 Which river is known as Sumagadhi?

Q.5 Which river is also known as Lakhandei and Karnali?

Q.6  On which river was the Indrapuri barrage built in 1968?

Q.7 Which city is known as Siraj of India?

Q.8  What does a fish shape denote in Mithila art?

Q.9 Where was the first Buddhist Council organised?

Q.10 The achievements of Rudradaman- I are described in which inscriptions?

Q.13 What was the age of Parshwanath when he relinquished his home?

Q.14 Under which article the governor recommends President’s rule in the state?

Q.15 Under which article can the president announce President’s rule in a state?

Q.16 Which epic was compiled in the Third Buddhist Council?

Q.17 Which is the rule book of Buddhism?

Q.18 Which book describes the philosophy of Buddhism?

Q.19  The first information about the Mahajanpadas is found in which book?

20. The governor appoints the members of council of ministers on whose recommendation?

Q.21 What was the minimum age prescribed for a person to enter Buddhist Sangha?

Q.22 Which two prominent leaders of Bihar were associated with Harijan Sevak Sangh?

Q.23 Under whose chairmanship the congress committee decided to launch the civil disobedience movement on 9th may 1930?

Q.25 Where was the freedom fighter Jubba Sahni from?

Q.26 Keshav Prasad Sinha was associated with which revolutionary conspiracy?

Q.27 Who was the first Muslim ruler to successfully invade Bihar?

Q.28 Who became the ruler of Magadha after the death of Shishunaga?

Q.29  Kaushambi inscription of Ashoka is in which state?

Q.31  Who started collecting tax from Tirhut region after establishing his rule over Bengal during the reign of Iltutmish in 1211 A.D.?

Q.32 Which poet is known as Kalidas of Bihar?

Q.33 During the rule of which Lodi king, Dariya Khan, the governor of Bihar, revolted?